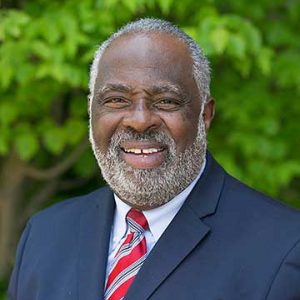 “Preaching is harder for me today than it has ever been for me in my life,” said Robert Smith Jr., Beeson Divinity School’s Charles T. Carter Baptist Chair of Divinity. Because with each passing year, he realizes “the weight of the responsibility of representing God and speaking on his behalf.”

Smith was 17 years old when he accepted the call to preach during a visit to New Mission Missionary Baptist Church in Cincinnati, Ohio. Ten years later, he was called to pastor the same church where he had first received his call, serving for almost 20 years. His first sermon was titled, “Lord, I shall preach the gospel,” based on Luke 4:18, “The Spirit of the Lord is upon me, because he has anointed me to proclaim good news to the poor. He has sent me to proclaim liberty to the captives and recovering of sight to the blind, to set at liberty those who are oppressed.”

This text and sermon title would prophetically describe the kind of ministry Smith was to have over the next five decades.

While serving as pastor of New Mission, Smith felt called to go back to school. He received a Bachelor of Science in 1984, followed by a Master of Divinity in 1988, and finally a Doctor of Philosophy in 1993. Smith eventually left the pastorate in 1995 to teach full time at his alma mater, the Southern Baptist Theological Seminary in Louisville, Kentucky, but he never left the pulpit. In 1997, Smith accepted a teaching post at Samford University’s Beeson Divinity School, where he celebrates 20 years of service this fall semester.

During his more than 20 years teaching at a seminary level, Smith has filled pulpits on Sunday mornings around the nation and world. He has lectured and taught on the subject of preaching at conferences such as The Gospel Coalition, the E.K. Bailey Preaching Conference and Morling College Preaching Conference in Sydney, Australia. He wrote Doctrine that Dances: Bringing Doctrinal Preaching and Teaching to Life and is what Beeson Divinity School Dean Timothy George describes as “the real thing.”

“For two decades, Robert Smith Jr. has taught at Beeson Divinity School with brilliance and compassion. He is not only a professor who can preach, but also a preacher who pastors our entire community,” said George. “God continues to use this beloved scholar to advance his kingdom and to enrich the whole body of Christ.”

In July, Smith was recognized for his many years of service and contributions to preaching as the recipient of the 2017 E.K. and V.M. Bailey Living Legend Award. This award has been given annually during the E.K. Bailey Preaching Conference in Dallas, Texas, since 1996, the inaugural year of the conference.

The award given to Smith reads, “We salute you on being one of the most compelling, creative, prophetic and prolific biblical preachers of our time. Your life witness, voice and literary contributions have awakened American preaching and pulpits.”

Oftentimes, people are recognized for their achievements after they have died, which is partly why this award was so meaningful to Smith. “It means that God has blessed me to be alive to receive the award,” he said. “I feel unworthy, but I am not ungrateful.

“It also means I’ve been placed in a line of preachers that are legendary, like Gardner C. Taylor, C.A.W. Clark, James Earl Massey, Stephen Olford, Willie Richardson, and E.K. Bailey. I’ve been cast into that kind of light in which I feel like, at best, I should be placed in their shadows and not stand alongside them, but even in their shadows I feel dwarfed and unworthy and out of place. It’s not an award that I put on my shelf, but it’s an award that reminds me that God has made a great investment in my life. Therefore, with all that I have and all that I am, I need to give back to our Lord and to the church.”

What’s next for Smith? To continue doing what he has done for 51 years— preach the gospel.

“All I know is that I have had fun in the pulpit, and the pulpit has become a playground of the Spirit for me,” said Smith. “Preaching is not just something I have to do. Preaching is something I can’t keep from doing. That’s who I am. I am a preacher, by God’s grace.”