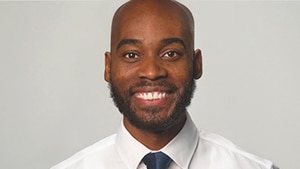 Darrick Smith grew up on a small farm in Godwin, N.C., where he met Jesus at the age of 16. He later attended college at North Carolina Central University in Durham, graduating with a bachelor’s degree in public health. He also received a master’s degree in special education, and taught elementary school for six years before going into full-time ministry.

Darrick has worked on staff at The Summit Church as a college minister, and as an associate pastor of Catalyst Church in Newport News, Va. He is currently finishing up a master’s degree in Christian studies at Southeastern Baptist Theological Seminary in Wake Forest, N.C.

He has a strong passion to see college students reached with the gospel and sent out to be lifelong disciple-makers. He labors to that end on the Collegiate Partnerships Team.

Darrick has led and been a part of several short-term mission trips across the world. He enjoys preaching and sharing the gospel. In his free time, you can find him at a CrossFit gym throwing around barbells and dumbbells. He is married to his lovely wife, LaShonna, and they have two beautiful boys, Noah Jace and Daniel Carter.