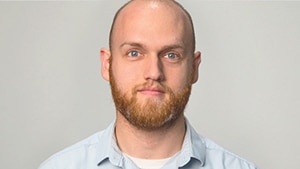 Eric Stishan began serving at the BSCNC in August 2015. Growing up near Baltimore, Maryland, he graduated with a bachelor’s degree in electronic media and film from Towson University.

Eric and his wife, Sarah, moved to Fuquay-Varina in August 2014. He enjoys photography, reading and a good TV series. Come stop by the studio so he can show off pictures of his daughters, Nora and Charis.