Q&A with Sherelle Ducksworth: Black Baptists and the Great Commission

Throughout Black History Month and beyond, we are highlighting historical figures and their contributions to the Great Commission. Sherelle Ducksworth, who is currently working on a doctorate in systematic theology at Southeastern Baptist Theological Seminary, shares about a number of black Baptists to know and learn from. She also encourages Christians to value leaders as whole, embodied beings whose worth comes not from what they produce, but in being made in the image of God.

African Americans in Baptist history were among the first to go to the nations with the gospel. They established a legacy of missions, church planting, education and evangelism that N.C. Baptists seek to continue to honor today.

Throughout Black History Month and beyond, we are highlighting historical figures and their contributions to the Great Commission. Sherelle Ducksworth, who is currently working on a doctorate in systematic theology at Southeastern Baptist Theological Seminary, shares about a number of black Baptists to know and learn from. She also encourages Christians to value leaders as whole, embodied beings whose worth comes not from what they produce, but in being made in the image of God. 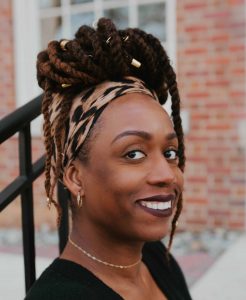 Ducksworth is a native of Clarksdale, Mississippi, and currently serves as a sociology instructor at Louisburg College. She earned an associate degree in general education from Coahoma Community College, a bachelor’s degree in sociology from Mississippi Valley State University, a masters degree in sociology with a concentration on social stratification from Mississippi State University and a masters degree in theology from Mid-America Baptist Theological Seminary. Sherelle and her husband, Aaron, live in Wake Forest and attend Christ Our King Community Church in Raleigh.

In recent years, there has been increased awareness of George Liele as the first African American to be ordained as a Baptist pastor and the first Baptist missionary to another country. Who are other African American figures in Baptist history you would love for people to know more about?

The history of African American Christians includes a number of men and women who loved the Lord and faithfully served Him in the midst of oppression and struggle. These are a few black Baptists who made a lasting impact on the American church.

Carey’s missional efforts paved the way for many black Baptists missionaries, and his legacy lived on through organizations such as the Lott Carey Baptist Home and Foreign Mission Convention in 1897 and the Lott Carey Laymen’s League.

Andrew Bryan was converted by George Liele and ordained in 1788. He was the first known black preacher and black church organizer in Georgia. He organized the First African Baptist church in 1788, which he pastored for 24 years.

Nannie Helen Burroughs was born 1878. She served as a missionary, stenographer and bookkeeper of the Foreign Mission Board of the National Baptist Convention (NBC). In 1900, Burroughs delivered a speech titled, “How Sisters are Hindered from Helping,” that motivated black Baptists to create the Women’s Convention Auxiliary to the NBC.

M.A.B. Smith was a secretary of the Women’s Auxiliary within the General Baptist State Convention of Texas and the Missionary Training School of Guadalupe. A prolific writer and administrator, Smith supported black missionaries through her gifts of administration and writing.

Ida M. Bowman Becks was born in 1880 and served as the secretary of the Colored Women’s League and field representative for the Florence Crittenton Home in Topeka, Kansas.

George Kelsey, Joseph H. Jackson and Gardner C. Taylor are among others to know. Resources about black leaders include “Biographical Sketches of Our Pulpit” by E.R. Carter, “Who’s Who Among the Colored Baptists of the United States” by Samuel William Bacote, “Our Baptist Ministers and Schools” by A. W. Pegues and “The Negro Baptist Pulpit” by E.M. Brawley.

What eras in Baptist history saw significant growth in or among African American churches and missionary work? What happened?

Black Baptist churches arose during a black exodus. Black Christians desired freedom from religious persecution and the ability to worship freely. During the 1700s, African American Christians expressed their zeal for Christ, His mission, preaching and teaching.

However, their zeal was often met with brutality and imprisonment. Many white Baptist churches maintained the social order of subordination and separatism within their churches. They either banned black Christians from participating in Sunday worship services, allowed partial participation which involved excluding them from observing ordinances, ordination and licensing, enforced separate seating or suppressed the practice of Christianity among enslaved and freed men, out of fear of slave rebellion and independence.

As a result, black Baptists formed their own congregations and forged a new way for them to live out their Christian faith and call to ministry.

The building of these churches began a momentum of church planting among black Baptists.

From 1840-1961, black Baptists formed more than 10 Baptist conventions and societies. They focused on missions, theological education, social progress of black people and social activism. Many of them continue that legacy today.

Carey’s missionary work was central to establishing the missionary enterprise among black Baptists. Subsequently, black Baptists created a number of organizations that centered on missions, such as the Baptist African Missionary Convention of Western States and Territories, the Petersburg African Baptist Missionary Society, the Women’s Baptist Foreign Missionary Society of the West and the Lott Carey Home and Foreign Mission Convention.

Through these organizations, a number of men were sent to the mission field, such as C.H. Richardson, Solomon Crosby, W.W. Colley, Harrison N. Bouey, James Edward East and E. D. Hubbard. Additionally, women such as Louise C. Fleming, Nora A. Gordon, Eliza L. Davis, Susie A. Taylor and E. B. Delaney were all sent to the mission field in the early 1900s.

“If we love the Great Commission, we have no choice but to learn about and appreciate the great contributions African Americans have made to the mission of the universal church. They, in the midst of circumstances many of us have never experienced, went to great lengths to tell others about Jesus.”

How can understanding and celebrating African Americans’ historical contributions to the Great Commission motivate and inform our mission efforts today?

I think if we love the Great Commission, we have no choice but to learn about and appreciate the great contributions African Americans have made to the mission of the universal church. They, in the midst of circumstances many of us have never experienced, went to great lengths to tell others about Jesus. They believed in the gospel message so much that they fought for the right and freedom to go and tell. This should motivate us. We should be encouraged by this legacy.

They also teach us something about missions. They show us that foreign and domestic missions are not mutually exclusive. Today when some of us think about missions, we see brochures filled with black and brown men, women and children from other countries. Unfortunately, the mission field has become viewed as overtly foreign, and this says subtly that “those foreigners” are lost, and we Americans are Christian. Our black Christian ancestors show us that the lost includes those in our communities and those around the world. They can help us cure cultural Christianity if we mirror their attention to both the foreign and domestic mission field.

Additionally, they encourage us to proclaim the gospel and to care for people’s suffering. One of the most encouraging things about black Baptist missionaries is their resolve to worship God freely and take the gospel to their neighbors and to the world in spite of their oppression and persecution. In the midst of slavery, lynching, whippings, economic deprivation and social barriers imposed on them, black Christian men and women were ignited by the Spirit of God to invite others to experience their God.

But, they did not ignore their suffering. Instead, they believed their freedom in Christ had implications for their earthly experience. This approach to the Christian life and the human experience led them to look to the future hope while navigating their oppression and suffering with their faith. They can show us how to preach the gospel and care for people’s earthly experience. They show us a full Christian life — one that distinguishes between the spiritual life and earthly life but doesn’t sever the two and make one irrelevant.

In a recent article about the movie “Encanto,” you wrote about human worth and dignity encompassing more than what people do. While we celebrate African Americans’ accomplishments in February, how can Black History Month guide Christians toward a fuller understanding of being made in the image of God?

One of the visible elements of black Baptists is their concern for the whole person. Black Baptists have seen humans as fully embodied with soul and spirit, and they have tried to understand as faithfully as possible what it means to be a whole person saved by God. By learning about them, their faith and ministry, we can learn how to see people as whole persons whose bodies matter.

Additionally, we can learn how to minister to those whose embodied experiences bring challenges to their experience in the world, their access to the gospel, hindrances to the gospel message in their life and ways to flesh out the implications of a saved life in a fallen world.

By reading and learning about who black Baptists were, by peeking into their love for God and their families, communities and the world, we get to gaze into who they were and how they carved out their identity in light of their faith. Black Baptists are not what they have contributed. They are a complex group of individuals who loved, suffered, experienced the paradox of joy and pain simultaneously in America and desperately wanted people to know God and know freedom.

Who are some unsung Black heroes in Baptist life today from North Carolina and beyond?

Some known individual black Baptists born in North Carolina in the 1800s and 1900s include Moses W.D. Norman (who was the dean of the theology department at Shaw University), Charles Francis Graves (president of Roanoke Collegiate Institute in Elizabeth City), Charles Benjamin Gordon (founder of the National Orphan’s Home and a North Carolina pastor) and Annie Eula Wilkins (Bible teacher and secretary of the Women’s Auxiliary to the Missionary and Educational Convention of Texas).

If we really read their sermons, use primary sources written by black Baptists and listen to their teachings, we will obtain a new narrative. We will see that many were sound in their theology, believed the gospel and the Bible compelled them to social activism and found God worthy of a praise that necessitated the physical expression of joy and gratitude.